In spending the past year building up Jaga-Me together with my team, the close of 2016 brought some much needed time for rest and reflection: why do we do what we do?

At Jaga-Me, patients have always come first – and that means that our founders and staff take the time to interact personally with countless families from varying walks of life. In doing so, I learned an important lesson: that everyone has a story.

And stories matter, because they encapsulate the human spirit – our memories, hopes, fears, and dreams. On top of that, everyone’s life story has, or will be touched by the effects of ageing or illness.

Earlier this year, my reflections were all the more poignant as my grandpa went through terminal cancer and eventually passed on. This is the most personal manner by which my work at Jaga-Me has crossed paths with my family. This reflection pays tribute not only to him, but also those responsible for giving him the best care possible at home.

Grandpa (“ah gong”) is 87 years old, and spent his entire life running a humble sundry shop business in downtown Georgetown, Penang. My family used to drive up from Singapore to visit during the school vacations, and I remember how he would sit behind the old school counter of his shop, settling payments with customers and striking up friendly conversations with them. Another vivid memory was when he brought me to the traditional candy store next door, where I would load up on chocolate bars and sweet treats, much to my parents’ disapproval.

Ah gong loved his food, like any good Penangite. He also loved to share it, and always ensured that my family and I loaded up on the best char kway teow, hor fun, durians or kuehs that Penang could offer. I remember how in his younger days he’d never hesitate to hop on his scooter to swoop up some of these treats for us, regardless of how inconvenient it was, so that we always felt at home.

But over the years, his passion for food and reduced mobility led to health issues with diabetes and heart disease. About 15 years ago his heart condition got to a stage where he went through a balloon angioplasty, and he had to continue on with life where medications and medical appointments were the new normal.

These health scares caused the family to rally together. Each of the four siblings (two sons and two daughters) did their part, whether it was in hosting and caring for my grand parents, or ushering them to medical checkups and recreational activities. Perhaps each of them knew that time was not on their side, and the clock was ticking without mercy. 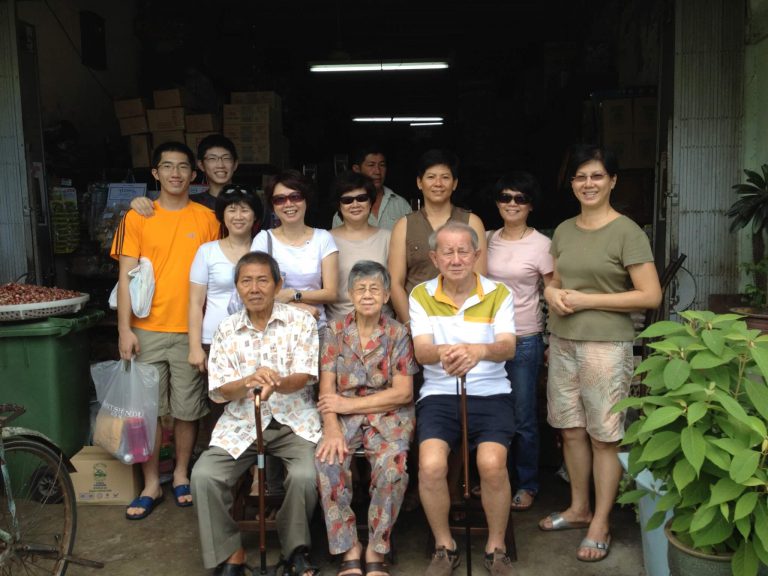 A spontaneous family portrait in front of the sundry shop, which was ah gong’s life’s work.

I remember one trip a few years ago, when we decided to do something for ah gong to make his life easier even as his limbs weakened. He still had to surmount a steep flight of stairs in his shophouse! Together, my uncle, brother and I undertook a daring project to build him a room on the ground floor, so as to provide him easy access to the toilet and shop entrance. After hours of heaving and hammering (none of us had any carpentry skills or training!), we carved out a room from the dusty recesses of the post-war era shophouse. (Trust me, the dust and debris we had to clear were certainly at least 40 years old!) But as I would later learn as a design engineer – solving a problem doesn’t guarantee you a user. We realised after the fact that he was hesitant to move downstairs as he would have felt separated from the rest of the family!

Extraordinary times call for extraordinary men and women. These heroes for ah gong were, without a doubt, my mum and aunt. The duty of caregiving was particularly heavy on the sisters – my mum and aunt – who invested more and more of themselves into caregiving as the years went by. From bringing their increasingly immobile parents to travel the world, to lavishing time and gifts – these sisters spared no expense.

As ah gong’s age began to catch up with him with weakened limbs in the past 2 years, my mum began to spend more and more time in Penang as a caregiver, sacrificing the comfort of semi-retired life in Singapore.

The past 6 months were the hardest, as ah gong’s condition deteriorated to the point of being hospitalised multiple times, and eventually became bedridden. He was practically entirely dependent on his family caregivers for every single one of his daily needs.

Even something as basic as urinating was no longer within his bodily control, and he required a catheter tube to assist him. Meal times became marathons, and his favourite food had to be blended into baby food consistency.

As if this wasn’t enough, ah gong was in pain. His facial grimaces spoke of something that came from within – it was bone cancer, we learned – the coup de grace. It was my mum’s cousin, a veteran nurse (who happens to be a director of nursing at a local hospital), who first pointed out this possibility, just by observing ah gong and tapping on her years of experience. The hospital tests confirmed this not only to be true but with a grim prognosis: stage 4. 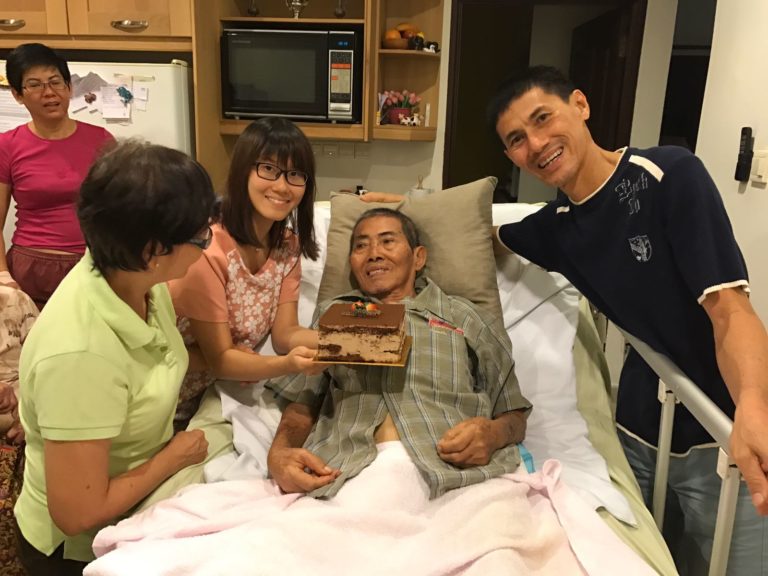 A precious moment shared by ah gong and his children, celebrating his birthday at home in December 2016.

The option of going to the hospital was given to him, but he declined. He wanted to be home. ‘Home is where the heart is’, they say, and that’s especially true for those with life-limiting diseases.

Just like that, the rules of the game changed entirely. The aim was now ‘comfort care’, as we call it in the healthcare industry: making the best out of the last stage of life, and supporting the patient to reduce the physical or psychological pain.

Home care is difficult. But the result is worth it.

My mum shared with me about the many difficulties they faced: maintaining ah gong’s personal hygiene (E.g. Bathing, and diaper changes), the early mornings and late nights. The learning curve was also steep for my mum and aunt, as first-time caregivers. They had to learn quickly from the hospice nurse, who would visit a couple of times a week. The sisters gradually learned how to treat and prevent bed sores, how to deal with constipation etc, on their own! Thanks to the guidance of the nurse in their home environment.

Despite the challenges, my mum felt that home care was the most meaningful way to “make up for lost time” and give back to her father. It was also the best place for spending quality time together as a family, especially as everyone gathered around to celebrate ah gong’s last birthday, and to bid him farewell.

A Chapter Closes. Another Begins

Little did I expect, that what we aimed to achieve at Jaga-Me: quality of life and quality care through home care, would become so essential in my own family situation. However, it was truly invigorating to have my own convictions strengthened for why we do what we do, and a clearer understanding of the challenges caregiving families face. Home care would not be possible without home nurses – and Jaga-Me’s job is to make it seamlessly easy to seek and utilise such nursing support.

Ah gong passed away in his sleep at 6 am on the 29th of December, 2016. He left a legacy of care for others, and memories of an easy smile, and a quiet disposition. More importantly, he left children who would care, despite the costs.

Farewell, ah gong. You will be missed.

P.S. Special thanks to the folks at Penang Adventist Hospital, and the Penang Hospice Society. Also to Jaga-Me Nurses who provided my family with advice out of their own time.

Find Out More From Jaga-Me

5 Steps to Take For Home Care This Mothers Day

Vision and Values Partner With Us Data Security & Trust Contact Us

By Doctors By Nurses By Care Assistants